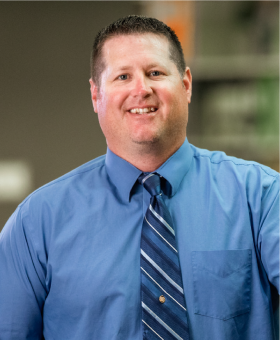 Professional History: Joel is a Marine Corps (Infantry) veteran of two combat deployments in support of Operation Iraqi Freedom. Not long after being Honorably Discharged in 2006, he started with the Mitchell Police Department. There, he held the ranks of Patrol Officer, Detective/Investigator and also Patrol Sergeant. Joel completed his undergrad officially in 2013 and his Master's in 2018. He worked for the Mitchell PD for more than 11 years before being hired by Dakota Wesleyan, his alma mater.

Hobbies: golfing with my family and attending as many DWU and Mitchell HS activities as possible

What do I love most about DWU?: This campus community is family -- starting with President Novak all the way down. That feeling was there in 1997 when I started my education here, but it's stronger today than it ever was. The amount of momentum this University has going for it regarding building forward with brick and mortar but also technologically and academically speaking is impressive. And, athletically, there is no one in the NAIA, and certainly not in the GPAC, that does it better than DWU and Mitchell.