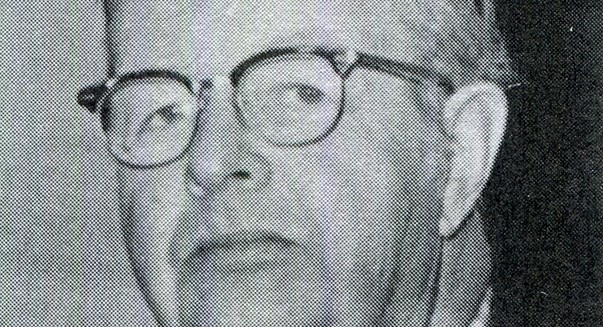 Sam F. Weller, a long-time Mitchell resident, businessman, community booster and Dakota Wesleyan supporter passed away in 1978, but not before leaving a profound impact on the city of Mitchell and the university.

Sam was born in Sioux City, Iowa, on December 5, 1901, to Charles and Sara (Ball) Weller. He graduated from Mitchell High School in 1919 and went on to play college football for Dakota Wesleyan University in 1921 and 1922. While at DWU, he was a member of DWU’s Kappa Pi Phi literary society and the “W” Club.  He was a member of the DWU football team where he was applauded for his pass receiving talent with hopes of being a “real asset to the Wesleyan squad.”  While a student, he reached Junior class status.

Sam moved to Glendale, Calif., where he married Edna Braase in 1927. They moved back to Mitchell where they made their home and raised two children, Corinne and Richard. Sam and Edna purchased their home on Court Merrill Street in the 1930s and lived across the street from the DWU campus for almost 70 years.

Sam had a keen business sense and joined the family business originally begun by his grandfather, Frank Weller, and continued by his father. The Weller Land Company was organized in Mitchell, S.D. in 1890 as a farming operation, and was later renamed The Weller Company when it added an insurance agency to its business purpose.

There were very few local groups not impacted by Sam’s devotion to service and to Mitchell.  He was actively and passionately involved in community organizations including the Masonic Lodge, the Mitchell Shriners, the Elks Club (lifetime member), the Lions Club (50-year member) and he was an artifact contributor and volunteer for the Friends of the Middle Border Dakota Discovery Museum.  He was a lifetime member of the Mitchell Sportsman’s Club, Ducks Unlimited and Quarterback Club.  He also served on the boards of directors of the Mitchell Development Corporation and the Chamber of Commerce.  Sam and Edna were active members of St. Mary’s Episcopal Church where he served as senior warden of the church vestry.

During his life Sam generously supported students at Dakota Wesleyan University by providing scholarships for their academic success.  After his death in 1978, memorial gifts funded the Sam Weller Memorial Scholarship Fund which today continues to support student scholarships.

The Sam F. Weller Family Foundation was formed in 2014 to honor the legacy of Sam and his family, making annual grants to charitable and educational organizations in the Mitchell area.  The foundation focuses grants on enhancing economic development; community problem solving; educational programs; and capital projects all with a focus on improving the Mitchell area.

Additionally, The Sam F. Weller Family Foundation has been generous with the efforts of Dakota Wesleyan University.  The foundation has supported DWU TeamMakers, the construction of the DWU black box theater in 2016 and most recently the construction of the Center of Business Innovation and Leadership.  Mr. Weller’s legacy of community support lives on in perpetuity through the endowment of this foundation and Dakota Wesleyan University is a grateful beneficiary.

According to the president of the Sam F. Weller Family Foundation board of directors David Olson, “The foundation and its board look forward to long-term support of the entities, agencies and programs that provide much needed support to the Mitchell community and surrounding area.”