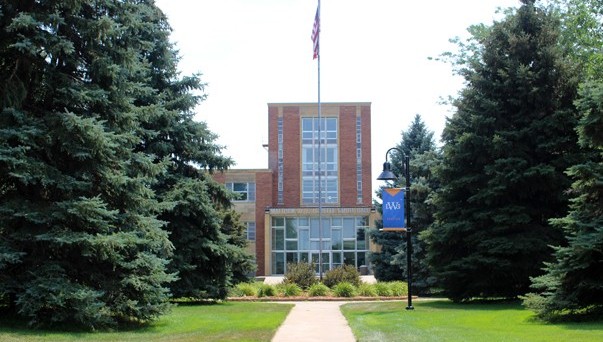 Built in 1956 as New College Hall, the building now known as Smith Hall was the answer to Dakota Wesleyan’s “Out of the fire – into a new a new day!” campaign. Dakota Wesleyan had lost its first building – Memorial Hall – to fire in 1888, then College Hall in 1955. In 1956, under the leadership of DWU President Matthew D. Smith, New College Hall opened, containing the new library, classrooms, faculty and administrative offices, a snack bar, game room and lounge. Over the years the building has had many upgrades and renovations. Today, in addition to faculty offices and classrooms, Smith Hall also is home to the Ron and Sheilah Gates Department of Music, as well as the offices of the president, vice president and provost. Other resources within Smith include: the IT department and helpdesk; the football program’s coaches’ offices; the marketing and communications department; the registrar’s office; the dean for adult learning and online programs; and the business and psychology departments; as well as an open computer lab. “New College Hall” was renamed Matthew D. and Loretta Smith Hall in 1971.

In front of Smith Hall, on the north side, is Memory Lane. This monument to the nearly 500 Dakota Wesleyan students, faculty and alumni who served during World War II was originally planted in 1943. Forty cedar trees lined the walk to College Hall by the class of 1943 with a wooden sign reading, “These trees were planted by the Class of 1943 with the help of undergraduates and friends in recognition of the services of faculty and students in World War II.” The sign deteriorated over time and was lost to memory – until 1990 when the Class of 1964 rededicated the lane with a stone marker at the site. The cedar trees, showing wear from storm damage, were replaced with blue spruce and still line the walk to Smith Hall today.