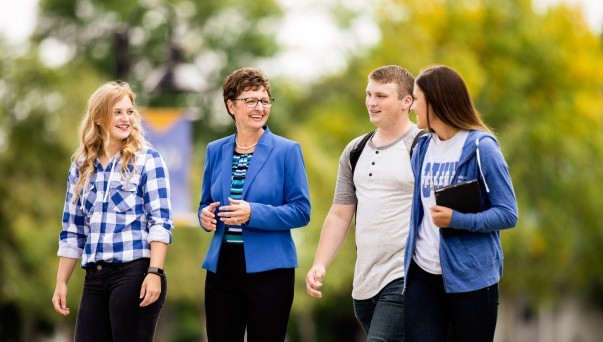 Dr. Amy Novak became the 20th and first female president of Dakota Wesleyan University in June 2013. Under her leadership, DWU has experienced a radical transformation in a short period, showing growth across all critical indicators, including record enrollment, retention, and fundraising. Recently, the university’s commitment to innovation was featured in a new book, “Pivot: A Vision for the New University”.

The institution will break ground on a donor-funded School of Business Innovation and Leadership and recently opened a new residence hall in 2018; an alumni welcome center and performing arts space in August 2017; a 90,000-square-foot sport and wellness complex in February 2016; and a 50,000-square-foot science center in August 2013. Novak credits a dedicated team with a clear and bold vision and a committed group of alumni and friends for spearheading the momentum the university is now experiencing.

The university has raised nearly $50 million since 2013 during its Greater Wesleyan campaign, and faculty and staff annual giving reached 100 percent. In February 2018, DWU announced Digital DWU – a university-wide digital initiative is enhancing the learning experience on campus through a one-to-one program with iPads given to every full-time, on-campus student. DWU will become the first and only university in South Dakota to adopt a one-to-one program, which is done in part by working with Apple Education.

Partnerships with business and industry to strengthen academic offerings and enhance the student experience have been critical to the institution’s growth. The university is invested in revitalizing communities and equipping rural America with an educated workforce. Novak’s expansion of partnership programs across the state and region has connected the institution to the industries and businesses most important to the state’s economic health.

The university’s curriculum now includes required coursework in innovation, creativity and problem solving, as well as a four-year program designed to prepare students for the life skills critical to post-college success.

DWU serves a significant portion of low-income, first-generation college students, and Novak serves on several state and national boards advocating for their success. She serves as the president of the South Dakota Foundation of Private Colleges, is the presidential representative to the NAIA council of presidents from the Great Plains Athletic Conference, and serves on the national board for United Methodist Higher Education.

Regionally, she is active in economic development work serving on a variety of boards. Novak is a frequent writer and speaker, regionally and nationally, on innovation in higher education as well as women in leadership. She routinely mentors young female leaders working in multiple roles, and she coaches them in establishing new patterns of work that enhance wellbeing.

A native South Dakotan and graduate of Mitchell High School, Novak has a bachelor’s degree from the University of Notre Dame and a master’s degree in economics from Wright State University in Dayton, Ohio. She earned her doctoral degree in interdisciplinary leadership at Creighton University in Omaha, Nebraska.

She and her husband, Ken, are parents to eight children, ages 12 to 25, and delight in being parents to the 950-plus students who call DWU home.

Novak in the News