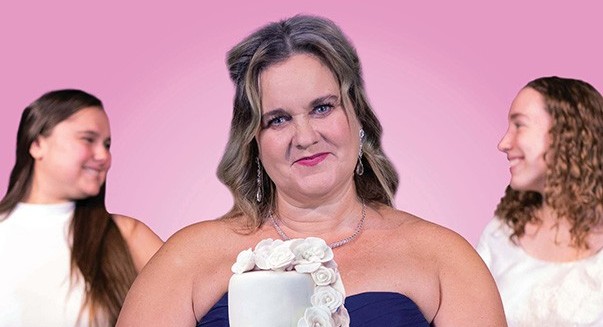 MITCHELL – The Ron and Sheilah Gates Department of Theatre at DWU will present “The Cake” by Bekah Brunstetter.  This special production will be staged at the Masonic Temple, 112 E. 5th Ave. in Mitchell, and will include three courses of dessert served as part of the ticket price.  Performances are scheduled for Feb. 11-14, with evening performances at 7:30 p.m. and the Sunday matinee at 2 p.m.

Directed as a senior student capstone project by Jonathon Freeman, “The Cake” is based upon the true story of events that occurred in a Colorado bakery in 2012 when a same-sex couple attempted to order a wedding cake.

Freeman knows that the subject matter may be uncomfortable for some.  “I challenge you to think about this show long after you leave the theatre.  There may be things in this show that you may not agree with.  That is OK.  We’d love to continue this conversation with you.”

Tickets are now on sale at https://www.dwu.edu/performing-arts/tickets.  General admission tickets are $20 per person and include three desserts served before, during and at the end of each performance.

Masks are encouraged to protect actors and at-risk patrons.

Other upcoming performances include the 80s musical “Rock of Ages” to be performed Apr. 1-3 and 8-10 at the Pepsi-Cola Theatre for the Performing Arts.

Also, the Ron and Sheilah Gates Department of Music has scheduled the following concerts to be performed in the Sherman Center on the DWU campus: