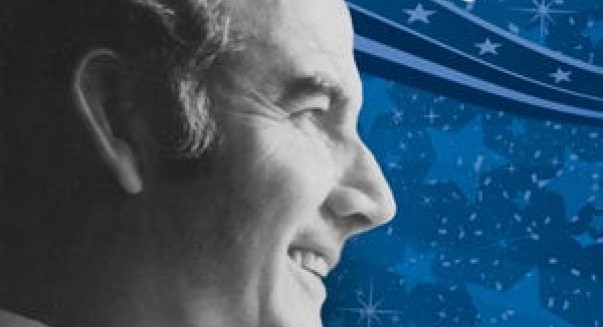 That’s why she wrote her book “George McGovern: South Dakota’s Legendary Legislator” in honor of him.

Inspiration for the children's book came shortly after McGovern’s death in 2012, Herbert said. The book was written for a fourth- through eighth-grade reading level to teach students about McGovern’s significance to South Dakota, the U.S. and the world. She released the book in October last year.

The only material available to fourth-graders on George McGovern was written at the adult level, said Herbert, a retired fourth-grade teacher from Sioux Falls.

“I realized what an impact McGovern had on South Dakota and the United States and felt there was a need for elementary children to know more about his leadership,” she said.

Students will learn McGovern was an “ordinary kid, just like them, who went on to do extraordinary things at the national and international level,” she said.

State historian Ben Jones said while he hasn't read Herbert's book yet, it's great to see someone dive in and write about "such an important South Dakotan."

"People like McGovern should be well-known among our students," Jones said.

McGovern grew up in Mitchell before he volunteered for the U.S. Army Air Forces and served in World War II. As a B-24 Liberator pilot, he flew 35 missions over German-occupied Europe from a base in Italy.

He was awarded multiple medals for his service, including a Distinguished Flying Cross for making a hazardous emergency landing and saving his crew.

McGovern is one of Dakota Wesleyan University’s most notable alumni, earning degrees there and at Northwestern University after the war. He returned to DWU in 1950 as a professor of history and political science, where he became a beloved and respected faculty member.

"It was interesting to sit in the library and talk about world politics with George," Joel Allen, director of the McGovern Center for Leadership and Public Service at DWU and associate professor of religion and philosophy, said. The McGovern Library now bears his name on campus.

"I think of him as a leader who brought political wrangling together with a moral vision," Allen said. McGovern "made friends with people on the other side of the political divide and had a clear vision of making the world a better place."

Herbert's book helps make McGovern's story accessible to all ages and shows "he was a decent guy, but also a person of incredible courage."

McGovern was elected to Congress in 1956 and re-elected in 1958. He failed in a bid for the U.S. Senate in 1960 but succeeded again in 1962. He became well-known for his opposition to the Vietnam War.

McGovern also staged a brief nomination run in the 1968 presidential election as a stand-in for Robert F. Kennedy. He was re-elected to the Senate in 1968 and 1974.

In 1972, Sen. McGovern was selected as the Democratic Party nominee for president, the only South Dakotan to be honored in this way by any major political party.

His life’s work also included leadership of the Food for Peace program, the UN-run World Food Programme, Senate Select Committee on Nutrition and Human Needs, and U.S. ambassador to the UN Agencies for Food and Agriculture.

The McGovern-Dole International Food for Education and Child Nutrition Program has provided school meals for children since 2000, and McGovern was named World Food Prize co-laureate in 2008 for this effort.

“McGovern’s leadership and service to others should inspire Americans to carry on his legacy,” Herbert said. “His place in history should never be forgotten.”