A spider of his own 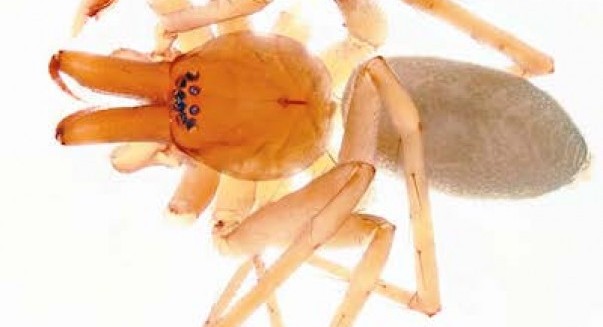 Brian Patrick used to believe that the only good spider is a dead spider, but as he grew up, he found value in the role spiders play in the world’s ecosystem. Now he has his own species.

A new article in the ZooKeys scientific journal written by Iranian and Russian researchers outlines the identification of a new genus and multiple new species of spiders in Iran.

The researchers, Alireza Zamani, from Iran, and Yuri Marusik, from Russia, wrote in their article that the new discoveries raise the total of known spider species in Iran to 900, and known genera (the plural form of genus) to 322.

Among the discoveries include Mesiotelus patricki, which Zamani and Marusik named after Mitchell arachnologist and Dakota Wesleyan University biology professor Dr. Brian Patrick.

The Mesiotelus patricki was first collected for research in 1975 in the Golestan Province in northeastern Iran. It is a brown spider, approximately 5 millimeters in length. Researchers were able to identify the Mesiotelus patricki as a new species by examining its genitals and other physical features of the spider.

Patrick said it’s not unusual for decades to pass between collection and description of a species, as collected samples are preserved and shelved until an expert examines them.

“It is really an honor to name a species after someone. I’m deeply flattered, but I just never thought that would happen,” Patrick said.

“There are so many more people out there that have put in so much more work that much more prolific scientists or deserve it more.”

Patrick has known the researchers for nearly a decade through multiple congresses of the International Society of Arachnology, and has occasionally communicated with them to keep in touch.

So, receiving a message from Zamani didn’t seem unusual.

Zamani’s message to Patrick told him to check out a ZooKeys journal article for a gift.

“Oh, WOW, I am so deeply moved (I shed a tear!) that my friend and colleague @Persian_spiders named a new spider species after me,” a tweet from Patrick reads.

In addition to his love for spiders, Patrick publishes his own podcast called New Species.

The weekly podcast — which is temporarily released bi-weekly — focuses on the discoveries of new species across the globe, including interviews with authors of articles that describe new species. Listeners originate from over 60 different countries across six continents.

Zamani was a guest on Patrick’s podcast back in May, discussing many different species that Zamani and Marusik had identified.

“I am an avid podcast listener, and I’ve been waiting for a long time for a podcast on new species discoveries. I was very happy when Brian started his podcast, and I thought that his efforts in popularizing taxonomy should definitely be acknowledged,” Zamani said in an email to the Mitchell Republic.

“Therefore, we decided to name this species after him.”

Marusik said the idea to name the species after Patrick was Zamani’s, but he supported it. He added that other new species identified in the same journal article were named after other arachnologists and even actors who have played Spiderman in movies.

While it may seem rare to have a species named after you, Patrick said that dozens of new species are discovered and identified on a daily basis.

“There are parts of our planet that we’ve barely been able to explore,” Patrick said. “There are species that people are finding in caves, species are being found in soil and all sorts of things.”

In fact, Patrick has identified new species, himself.

A 2008 article in the Zootaxa journal written by Patrick and two other researchers identified the Myrmedonota aidani, a rove beetle that Patrick named after his son, Aidan. He also has plans to name other species after his daughter, Thea, and his wife, Traci.

Patrick said the rate at which new species are being identified is incredible, and can make one feel small — but, he warns that discoveries are not outpacing extinctions.

“There’s a famous example of an airplane flying in the air.

Airplanes are being held together by rivets or screws. If you lose one or two rivets, it’s probably no problem,” Patrick said. “But how many can you lose before the airplane crashes? Take that into the ecosystem.

How many organisms can we lose before the ecosystem dies or crashes?”

Patrick continues to play his part in exploring the vast unknowns of the world’s ecosystem by conducting research on the species — known and unknown — inhabiting the Fort Pierre National Grassland.

“Nobody looks in South Dakota. They all think our habitat looks the same from Canada to Northern Texas,”

Patrick said. “In a field where less than 10% of all species are estimated to be known or named, and that means 90% of things in the world are not named.”

Patrick believes he may be the only trained arachnologist in the state, but often works with interns hoping to share his passion with others.

The New Species podcast can be found on Apple Podcasts, Google Podcasts, Breaker and several other platforms.