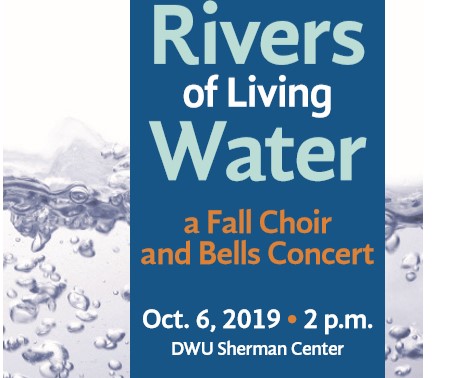 The culmination of Blue and White Days at Dakota Wesleyan University will be the free choir and bells concert on campus.

The Ron and Sheilah Gates Department of Music at DWU will perform its fall choir and bells concert, “Rivers of Living Water” on Sunday, Oct. 6 at 2 p.m. in the DWU Sherman Center. Performances will include: the Wesleyan Bells, Dakota Dynamics, The Singing Scotchmen, Dakota Wesleyan Choir and The Highlanders. The Blue & White Unite Concert is free and open to all who wish to attend.

“The concert will feature both sacred and secular music revolving around the theme of Rivers of Living Water. A few pieces the audience might recognize are an arrangement of Africa, which will feature some student soloists, and a handbell arrangement of the theme song from Pirates of the Caribbean,” said DWU music instructor, Erin Desmond.

The concert will be directed by both Dr. Clinton Desmond, director of choral activities at DWU, and Erin Desmond, with special accompanies by Erin Desmond and Elizabeth Soladay.