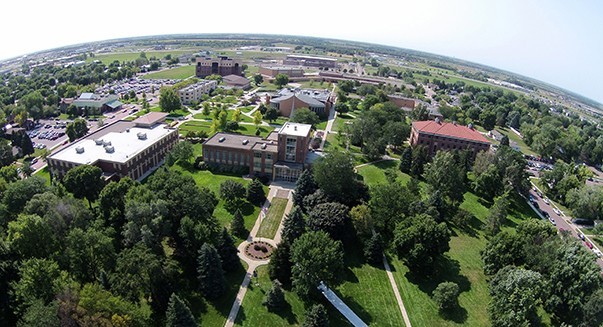 This year, DWU’s enrollment is at 900 total, which includes a new record for online students, as well.

“We couldn’t be happier with the numbers we’re seeing,” said Fredel Thomas, dean of admissions. “We feel that with the overall competitive market in higher education and the decreasing size of graduating high school classes in the region, the fact that we are not just holding steady, but increasing, is something that really encourages us, makes us proud.”

An exciting number to watch is in online education. Dakota Wesleyan offers two master’s degrees in education and business administration and two bachelor’s degrees – a degree-completion program and nursing. The online program has exploded in the past few years.

“Three years ago we had 55 online students – this year we have 197 – that’s a 249 percent increase in three years,” Thomas said. “We have to give a huge congratulations to Dr. Derek Driedger, the dean of adult and professional studies, and Diane Sandhoff, director of nursing, and Dr. Monty Bohrer, director of the business graduate program, for the work their departments have done to build enrollment.”

Part of that 900 are 178 new freshmen on campus, which is holding steady with last year’s incoming class. Not included in the 900 are 84 students who are enrolled in dual-credit courses at Mitchell High School.

Following Dakota Wesleyan’s largest graduating class, DWU’s enrollment for the 2016 fall semester impressed even those whose job it is to bring students in.

“Bringing in a big freshman class is just a piece of the enrollment picture, it is also hinged on transfer students and retention,” Thomas said.

Dakota Wesleyan’s freshman to sophomore retention rate is 76 percent, which is an increase over the past few years. Also, a large percentage of DWU’s transfer students this fall are those within a 50-mile radius, and several are students who began at DWU, transferred elsewhere and are now returning, all of which Thomas feels speaks well of the university.

“All in all, our solid enrollment and retention aren’t just thanks to one program or team or department – it’s a true reflection of how this region sees Dakota Wesleyan – as a consistent, solid investment with programs that have proven to produce exceptional young people in their respective fields,” Thomas said.