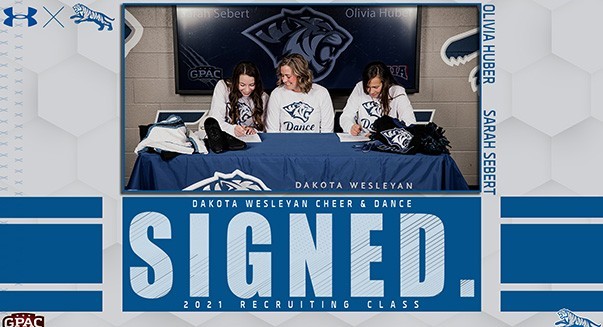 Sebert will begin her DWU cheer and dance career in the fall of 2022 after competing in dance since the age of six. Sebert danced at Linda Feterl’s School of Dance until they closed their doors her seventh-grade year. After that, she continued improving her dancing at Core Kinetics for one year before transferring to A.H.hhh…Dance, where she has competed for the last four years.

After officially signing with Coach Huber and the Tigers, Sebert stated, “I am super excited to be part of this new era of DWU Cheer and Dance! While DWU has been part of my life growing up, it’s exciting to be part of the first-ever Tiger dance team.” Sebert continued that signing for a collegiate sport was always her dream but signing for the Tigers is something special for her.

Coach Huber’s second student-athlete, Olivia Huber, also began at Linda Feterl’s School of Dance. Huber was a critical component of Feterl’s dance line. Much like Sebert, Huber transferred to Core Kinetics for one year before making the transition to A.H.hhh…Dance during her freshman year of high school. In addition to being a performer at A.H.hhh…Dance, she also mentored the Junior A.H.hhh…Dance performers over the last three years, allowing her to improve her knowledge and skills.

After signing her NLI, Huber stated, “DWU has provided me with an amazing opportunity to do more than just receive an education. Dance has always been part of my life and being one of the first to sign an NLI for Tiger Dance is something I will always be grateful for.”

Both Sebert and Huber have performed at many different events while performing with A.H.hhh…Dance including Mitchell High School basketball games, DWU basketball games, NBA G-League, Sioux Falls SkyForce games and the Hanson Classic, to name a few.

After Coach Huber officially inked her first two dance signees for the brand-new Tiger dance program, she was beyond excited for the opportunity, stating, “I am so excited DWU decided to add Dance as another opportunity for our students.  For a lot of girls, they begin dancing at a very young age and dance becomes a huge part of who they are.  When they attend college, their dance career abruptly stops, and these students can feel a little lost.”

Coach Huber continued, “DWU Dance will allow students to work together, be creative, perform and form another little family within the larger campus family. I am so proud and honored that I can work with these student-athletes.”

Coach Huber has worked with Sebert and Olivia Huber for the last four years at A.H.hhh...Dance.  She is excited to continue working with both young ladies throughout their four years at DWU.  Coach Huber closed her statement by saying, “I am anxious to watch them continue to grow as dancers and individuals.  I am very blessed and honored Sarah and Olivia are the first signees of DWU Dance and Cheer."