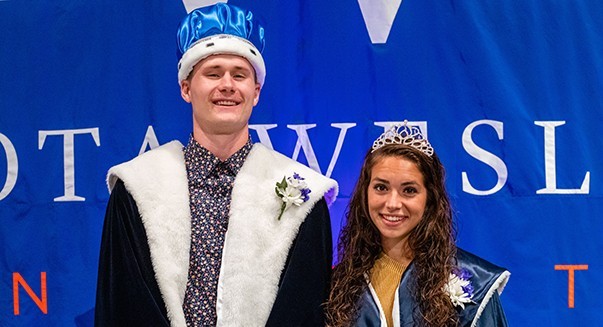 Michaela Herman, Reliance, is majoring in Mathematics Education.  Herman is a member of the Women’s Soccer team.  She also serves as treasurer for the Student Senate Exec., is vice-president of the Math Club, is a member of the Future Teachers Organization.  Herman is the recipient of several scholarships including a Trustee Academic Scholarship, Athletic Scholarship and Christian Leadership Scholarship.  On campus she has worked for three years as a Dayton Hall resident assistant.  Her parents are Nathan and Tisha Herman.

Mason Larson, Langford, is a Psychology major with a concentration in Counseling and a Business minor. He is a captain for the Men’s Basketball team and has been named All-Conference Honorable Mention.  Mason is a penny stock investor.  He graduated from Langford Area High School and is the son of Susan Larson and Kevin Larson.

DWU also crowned its 2021 Beanie Royalty – a title bestowed on two freshmen who have already made an impact on the campus community during their short time at DWU and have embraced DWU’s values of learning, leadership, faith and service. Adaya Plastow, of Mitchell, and Chase Riche, of Council Bluffs, Iowa, were named this year’s Beanie Royalty.

Adaya Plastow, Mitchell, is a biochemistry major. She is a member of the DWU women’s basketball team and competes in cross country and track. She is the daughter of Robert and Pamela Plastow.

Chase Riche, Council Bluffs, Iowa, currently has an undeclared major. He is a member of the DWU football team. Riche is the son of Rich and Pamela Riche.