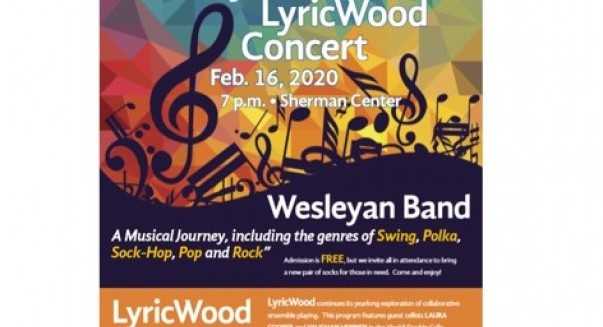 The Ron and Sheilah Gates Department of Music at Dakota Wesleyan University will perform a Wesleyan Band and LyricWood concert Sunday, Feb. 16 at 7 p.m. in the DWU Sherman Center.

The evening will consist of an array of musical selections by the Wesleyan Band, conducted by Ronald Stoneback, and the LyricWood Cadets and LyricWood String Orchestra co-directed by Esther Meador and Elizabeth Soladay. The concert will include the genres of swing polka, sock-hop, pop and rock. Stoneback and Soladay emphasize this won’t be a typical LyricWood and Wesleyan Band concert and will even include choreography from guest dancers and a number of surprise student soloists.

“This whole concert is wrapped around the culture of dance and movement. Music is dance and dance is music,” said Stoneback. “The focus will be on those tunes that have caused people all across America to move to the dance floors throughout the years.”

The program will consist of the sounds of Benny Goodman, The Six Fat Dutchmen, Bill Haley and the Comets, Michael Jackson, Paul McCartney, Queen and more.

“This concert is the culmination of LyricWood’s year of focusing on collaborative music-making,” said Soladay. “Each player is responsible not only for knowing their individual part, but also for being cognizant of how that individual part plays into the musical whole. Collaborative playing requires vigilant listening as well as accurate playing, and our musicians have worked hard to grow into this next level of musicianship.”

Another twist on this concert includes a request for audience participation before the show even begins – donating a pair of socks.

With the cold, brutal winters of South Dakota, several go without adequate clothing, including warms socks for their feet.

While admission is free, the Ron and Sheilah Gates Department of Music is asking all audience participants to bring a new pair of socks to be donated to those in need. An act that Stoneback says will, “warm the hearts of others one sole at a time.”

Corporate business such as Cabela’s, Fashions Unlimited, J.C. Penney (Sioux Falls), UPS, Tractor Supply and several others have generously donated socks in partnership with the music department and this performance.

“Come rock your socks off with a plethora of great music, while donating socks to those in need!” said Wesleyan Band clarinetist, Morgan Taft.

Upcoming events for the Ron and Sheilah Gates Department of Music: