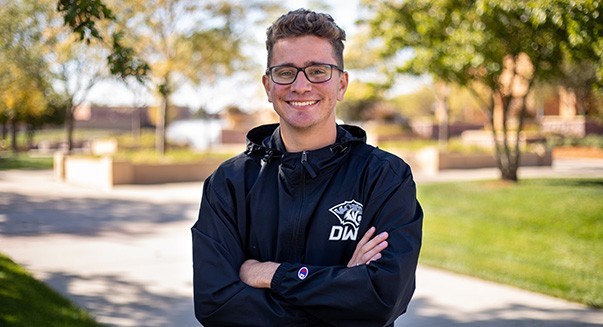 KANSAS CITY, Mo. — The National Association of Intercollegiate Athletics (NAIA) has honored five individuals, including a DWU junior, as a part of the annual Champions of Character® Foundation Awards.  Lucas Paixao Trindade, São Paolo, Brazil, was selected as the Collegiate Student-Athlete of Character.

Paixao first came to the U.S. as a student-athlete in 2018 to attend Coastal Bend Junior College in Texas.  He transferred to Dakota Wesleyan and is currently studying Sports, Exercise and Wellness.  Since arriving at DWU in January 2021, he has displayed exceptional leadership in the classroom, on the pitch, and as a student manager and student assistant.  Paixao was voted co-captain of the 2021 Men’s Soccer team, promoted to student manager at the campus cafeteria, and recruited as a student assistant to help create DWU’s International Student Services.

“Character-driven athletics are a primary focus for us and our institutions,” said NAIA President and CEO Jim Carr. “These honorees embody those five core values, and we are excited to celebrate their achievements.”

Those receiving recognition were feted at a luncheon on Nov. 9, 2021, at the Marriott Muehlebach Hotel in downtown Kansas City, Mo. Kansas City Royals and NAIA Institution Graduate John Sherman served as this year’s keynote speaker.  Other awards presented included:

The Champions of Character Foundation Awards and Virtual Fundraiser celebrates the character values of those who make a difference in the culture of sport and in a community. Support from the event is designed to create a better culture of sport through the advancement of character education programs that intentionally teach the five core values to young people.