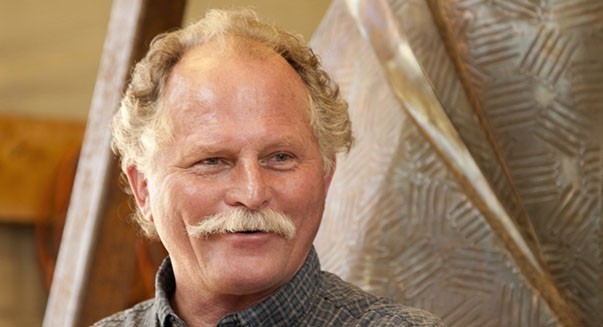 MITCHELL – Dakota Wesleyan University will honor Dale Claude Lamphere with an honorary doctorate of fine arts during commencement services on May 9, 2021 at 1 p.m. at the Corn Palace.

Dale Lamphere, of Sturgis, has established a legacy as one of the finest sculptors in the region. During a nearly 50-year career, Lamphere has created over 60 pieces of monumental public sculpture, as well as many works of art held in private collections.

Lamphere’s connection to Dakota Wesleyan University stems from his creation of the sculpture of George and Eleanor McGovern that graces the entrance to the McGovern Library.

“We are pleased to honor Dale Lamphere with an honorary doctorate of fine arts. Dale has used art to tell the diverse story of South Dakota and our Great Plains region. His work expresses beauty, emotion, creativity and innovation, and reminds all of us of the diversity and traditions that formed and honored this region. Dale’s sculpture of George and Eleanor McGovern on the DWU campus stands as a hallmark of the legacy of his work for generations to come. DWU is grateful to recognize people whose impact in telling our collective story, continues to shape whom we become,” said DWU President, Dr. Amy Novak.

Lamphere designed and created a two-room chapel and several sculptures at the Basilica of the National Shrine in Washington, D.C. Locally, Lamphere’s 50-foot, 12-ton stainless steel sculpture “Dignity” overlooks the Missouri River near Chamberlain. Most recently, Lamphere’s “Arc of Dreams” was installed this past summer in Sioux Falls, spanning the Big Sioux River. Two 150-foot arcs rise 70 feet above the river and taper to a 15-foot separation.

“The ‘Arc of Dreams’ represents the journey of everyone’s dream. At some point, it requires a leap of faith to make it [a] reality. The ‘Arc of Dreams’ is the hopeful path our dreams take as they enter our consciousness, are defined by our intellect, and are ultimately entrusted to our faith in the future,” said Lamphere.

As a mentor, Lamphere is committed to the growth of younger South Dakota artists such as Scott Luken, John Lopez, Jim Maher, Grant Standard and Andy Roltgen.

“The vast and varied beauty of our state has inspired painters, writers, poets, musicians, dancers and sculptors to express themselves with passion and excellence. Consistent and disciplined efforts of thousands of people over time have created the arts in South Dakota as they are today. I am honored to be a part of that tradition and to carry it forward,” said Lamphere in 2015 when named South Dakota Artist Laureate.

As explained by Lamphere, through sculpture, he seeks to express the strength and grace of the human spirit using timeless design, contemporary materials and innovative techniques. He has most definitely succeeded in that mission.