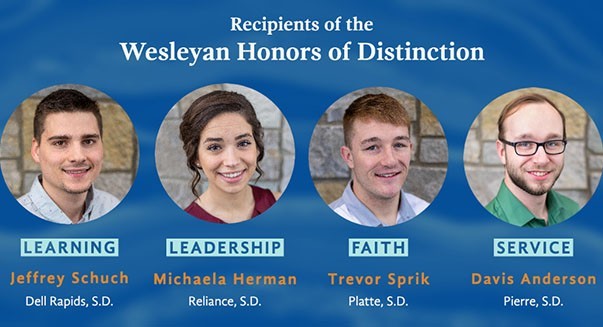 To qualify for candidacy, students must have a minimum cumulative GPA of 3.25 or higher (3.7 for the learning distinction), as required by each award’s guidelines and be ranked as senior status. Those eligible submit an application and the finalists are selected by a Student Senate-appointed panel. The finalists are then interviewed by a committee of students, staff and faculty who choose the recipients.

In the category of Honors of Distinction for Learning, Jeffrey Schuch, Dell Rapids, was named.  Schuch is a Biochemistry major and is the son of David and Cindy Schuch.  Schuch carries a cumulative grade point average of 3.9 and earlier this year was awarded the A.O. Duer scholarship by the NAIA, one of only two awarded each year nationally.  Schuch is a member of the men’s basketball team and was a candidate for Blue & White Days Royalty.  Schuch is a recipient of the Hilton Ira Jones Distinguished Scholar award in Chemistry; is a Daktronics NAIA Scholar-Athlete; a DWU Scholar-Athlete and has received Honors in Scholarship.

In the category of Honors of Distinction for Leadership, Micaela Herman was selected.  Herman is a native of Reliance and is the daughter of Nathan and Tisha Herman.  She is majoring in Mathematics Education and has been active in several campus organizations including Student Senate; Math Club; Future Teachers Organization; Women’s Soccer; Resident Assistant; Blue & White Days Royal; Women’s Bible Study; and Christian Leadership. She received the Levi Asa Stout Medal for Mathematics (Education) and the Adkins Mathematics award.  She is a Daktronics NAIA Scholar-Athlete; a DWU Scholar-Athlete and has received Honors in Scholarship.

In the category of Honors of Distinction for Faith, the recipient was Trevor Sprik.  Sprik is a Biology major, a native of Platte and the son of Troy and Kristina Sprik.  Sprik has been an active participant in Campus Ministry, Student Ministry Council and served on the Blue & White Days Committee.  Sprik received the Marv Miller Christian Leadership award and has received Honors in Scholarship.

In the category of Honors of Distinction for Service, the student selected was Davis Anderson. Anderson is an Accounting major.  He is a native of Pierre and is the son of Dale and Lana Anderson.  Anderson has volunteered at food pantries in Pierre and Mitchell, serves as a campus ministry leader and on the Campus Care Team; has taught a middle school youth group and counseled at numerous church camps.  Anderson also led initiatives to purchase food and supplies for food pantries.  He plays in Wesleyan Bells and sings in both the Dakota Wesleyan Choir and the Highlanders.  Anderson received the Harmon W. Brown Medal in Accounting; the Sinfonia Service award for music; the George & Eleanor McGovern Student Leadership and Public Service award; and has received Honors in Scholarship.

The following students were also named as candidates for Honors of Distinction:

Wesleyan Honor of Distinction for Learning

Wesleyan Honor of Distinction for Leadership

Wesleyan Honor of Distinction for Faith

Wesleyan Honor of Distinction for Service