Honorary doctorate to be presented to alumnus at DWU Commencement 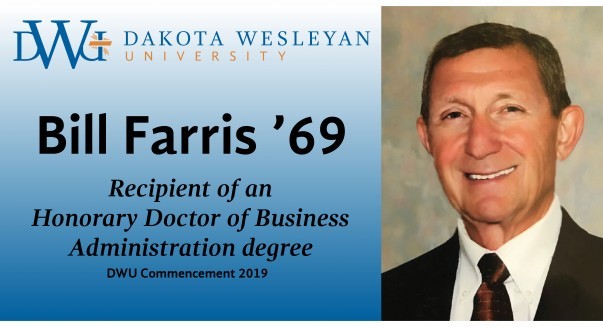 DWU’s Commencement ceremony is set for 1 p.m., Sunday, May 5, at the Corn Palace with 190 graduates. Mitchell native Steve Jarding will give the Commencement address, “Creating Giants,” and 1969 DWU graduate Bill Farris will receive an Honorary Doctor of Business Administration degree.

Baccalaureate services will be at 7 p.m., Saturday, May 4, in the DWU Sherman Center. The Rev. Eric Van Meter, campus pastor, will give the welcome and the baccalaureate message, “All the Fuss.”

Both Commencement and baccalaureate services will be streamed live at www.dwu.edu/live and later posted online to DWU’s YouTube channel.

Bill Farris, of Ponte Vedra Beach, Fla., graduated from Mitchell High School in 1965 and enrolled at Dakota Wesleyan University that fall after committing to play basketball for past head coach, Gordon Fosness. As a DWU student, Farris made the dean’s list, was active in Fellowship of Christian Athletes and taught Sunday school to junior high students at Mitchell First United Methodist Church.

In 1969, Farris graduated from Dakota Wesleyan with a Bachelor of Science degree, accepted a teaching position at De Smet High School and married Noelle Diane Knight, another 1969 DWU graduate. They have two daughters together.

Farris received his draft notice and enlisted in the United States Air Force in the spring of 1970. Upon completion of basic training at Lackland Air Force Base, in Bexar County, Texas, Farris was assigned to Keesler Air Force Base, in Biloxi, Miss., where he became a Morse code intercept operator and later an instructor, subsequently earning a master instructor certification. During his military tenure, Farris was named Airman of the Month, Instructor of the Month, and honored with the Air Force Commendation Medal.  He and his wife also served as youth leaders at Beauvoir United Methodist Church in Biloxi.

During Farris’s professional career, he volunteered and played an active role for several organizations, such as Habitat for Humanity, United Way, Rotary Club, Salvation Army, United Methodist Church, and many more. He served as a member of the Dakota Wesleyan University Board of Trustees for two terms and was a recipient of the Dakota Wesleyan Outstanding Young Alumnus award in 1980.

Farris and his wife have long supported DWU with gifts to the Christen Family Athletic Center, the McGovern Library, the DWU/Avera Sports and Wellness Complex, endowed scholarships, the Wesleyan Fund and the President’s Circle. They received the Scotchman, the Tumbleweed, the President’s Award and the Sacrifice or Service cumulative giving awards for their continued generosity to the university.

When asked about his connection to DWU, Farris said, “I feel very indebted to DWU for my education and toward the faculty and community who positively influenced my life’s direction.”