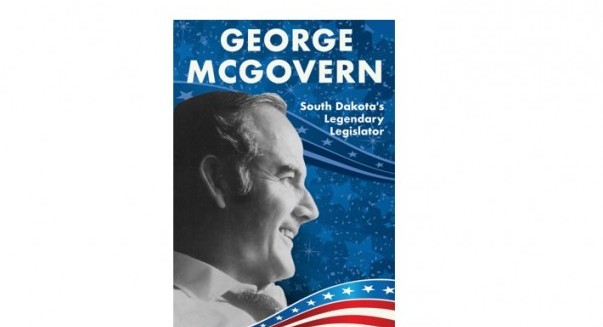 Herbert’s inspiration for writing her book, “George McGovern: South Dakota’s Legendary Legislator” came after McGovern’s death in 2012. The book is a children’s book, aimed at teaching young elementary-aged students about the significance of Sen. McGovern in South Dakota, the United States and around the world.

“I realize what an impact McGovern had on South Dakota and the United States and felt there was a need for elementary children to know more about his leadership,” said Herbert. “I’m a retired fourth grade teacher, and as we were studying South Dakota history, the only material available to them on George McGovern was written at the adult level. They didn’t get much out of it.”

The book is written at a reading level for students in grades four through eight to assist in research when studying South Dakotans and politicians who made a big impact in the world. Students will learn that McGovern was an ordinary kid, just like them, growing up in Mitchell, who went on to do extraordinary things at the national and international level.

McGovern was one of South Dakota’s most accomplished politicians and one of Dakota Wesleyan University’s most notable alumni. McGovern enrolled at DWU in 1940, however, World War II interrupted his education in 1943. He flew 35 combat missions as a B-24 bomber pilot in Europe, earning the Distinguished Flying Cross.

After the war, McGovern returned to DWU, graduating in 1946. He returned again to DWU in 1950 as a professor of history and political science, where he became a beloved and respectful faculty member.

He was elected to congress in 1956 and reelected in 1958. In 1972, Sen. McGovern was selected as the Democratic Party nominee for president, the only South Dakotan to be honored in this way by any major political party.

“McGovern’s leadership and service to others should inspire Americans to carry on his legacy. His place in history should never be forgotten,” said Herbert.

“George McGovern: South Dakota’s Legendary Legislator” is available on Amazon as an e-book, as well as soft cover. You can order a copy of the book here.