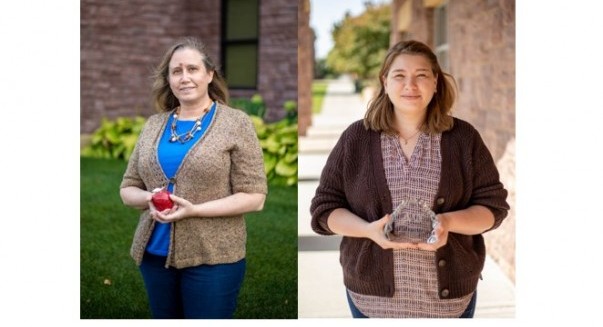 Paula Mazzer has been awarded the prestigious Clarke Award for Teaching Excellence.

The Clarke Award, first instituted in the 1996-97 year, was endowed by John and the late Vicki Clarke as an award to be given annually to a Dakota Wesleyan University faculty member for excellence in teaching, serving the needs of students and service to the university and community. The award is typically presented at Commencement in the spring. This year however, because of the postponement of Commencement due to COVID-19, the decision was made to present the award at a later time. Nominations are solicited from the DWU campus community.

Dr. Mazzer, an associate professor in the biochemistry department, is described by her students as patient, and that her support exceeds expectations.

“One of the many things that makes her so great is her patience with students. The number of hours I spent in her office asking for help are immeasurable, yet she never gave up on me,” one nomination form stated.

To others, Dr. Mazzer is so much more than just a professor.

“It wasn’t until this past year when I was going through some family issues that I truly felt like I was one of the luckiest students because she was my professor. Through tears and long conversations, she was there for me – as a professor, as a friend and as someone who really cares about her students’ wellbeing,” read another nomination letter.

Dr. Mazzer has also been the driving force behind DWU’s ongoing and successful participation in the South Dakota Biomedical Research Infrastructure Network (BRIN) as well as the South Dakota Experimental Program to Stimulate Competitive Research (EPSCoR). Her tireless work on behalf of the university’s BRIN and EPSCoR partnerships has supported the research of multiple faculty members and provided many students with research opportunities, both at DWU and at other biomedical research labs across South Dakota.

Dr. Mazzer first came to DWU in 2011 after previously teaching at Old Dominion University in Norfolk, Va. She received her bachelor’s degree from the University of Delaware before later going on to earn a Ph.D. in chemistry from Kent State University. Her postdoctoral research was with the Environmental Molecular Science Institute at Ohio State University.

The Clarke family has generously decided to also create a companion Clarke Award for Staff Excellence that is making its inaugural debut this year. Kelly Thompson has been named the first, annual recipient of the award.

Thompson is praised always by her colleagues for her professional expertise and exceptional problem-solving skills, but perhaps no more so than during the university’s abrupt transition to online learning during the spring 2020 semester.

“As we made the sudden switch to remote learning this spring, Kelly kept us afloat. She quickly identified resources that made it possible to transition to a new learning environment smoothly and effectively, providing clear and concise instructions in real time. I could not have been successful this spring without her,” one of her nominators said.

Thompson’s expertise offered critical direction and support to faculty members during the transition to digital learning, and her ongoing professional development guidance has equipped faculty to develop resilient courses that can transition more readily from face-to-face to a remote format. Thompson has proven herself to be an adroit problem-solver, patient listener and coach, and strategic thinker.

“Kelly possesses many skills that make her an indispensable member of the DWU staff. When I come to her with questions about digital learning, she quickly responds, and, when I am uncertain of what I need, she can piece together my vague requests and share resources, compile information, and, in short, solve all my problems,” stated another nomination letter.

She has earned certification as an Apple Learning Specialist and has hosted countless professional development mini-lessons and workshops to help faculty become more adept in their use of digital pedagogies.

Thompson arrived at DWU in 2012 as a cataloging and serials librarian. In 2017, her title and role changed to that of metadata and digital scholarship librarian. In more prosaic terms, this means she works to assist faculty in using digital technologies to enhance student learning and engagement. Her work has been integral to the successful adoption of the CANVAS learning management platform as well as the DigitalDWU initiative. Thompson earned a bachelor’s degree in English from South Dakota State University and a master’s degree in library science from the University of North Texas.