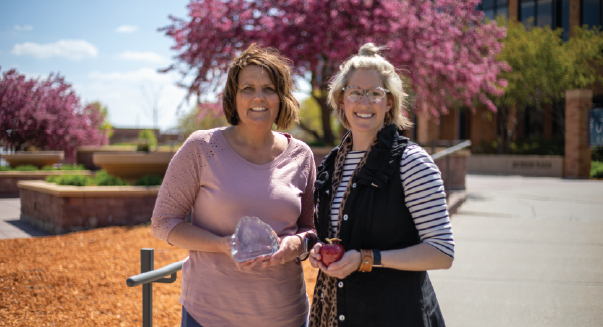 The Clarke Award, first instituted in the 1996-97 year, was endowed by John and the late Vicki Clarke as an award to be given annually to a Dakota Wesleyan University faculty member and a staff member for excellence in teaching, serving the needs of students and service to the university and community. Nominations are solicited from the DWU campus community.

Melroe Lehrman began teaching at DWU in 2011. She holds B.S., M.S. and Ph.D. degrees from South Dakota State University. Melroe Lehrman currently serves as the dean of the Donna Starr Christen College of Healthcare, Fitness and Sciences; chairperson of the chemistry and physical sciences department; and CHAOS club’s faculty adviser. She was selected for the Faculty Professional Excellence Award in 2015. In the fall of 2015, Melroe Lehrman received a HOPES grant which has gave her students the opportunity to work with and teach science to fifth graders from LB Williams Elementary, located on the DWU campus.

Melroe Lehrman’s selection was made based on several themes that were evident in her evaluations and nominations: creating an environment conducive to learning; using questioning as in integral part of the learning process; expressing sensitivity and responsiveness to the needs of students; and engaging in service at a significant and impressive degree.

Provost Joe Roidt, in his remarks recognizing Melroe Lehrman at the commencement ceremony, quoted a faculty nomination: “To write that Bethany is dedicated to Dakota Wesleyan’s mission is an understatement. She shows her support and enthusiasm for student success not only in the classroom but also at athletic events.  She works hard to promote the department and university to prospective students and encourages students to develop themselves fully.”

Alexander has been employed at DWU since 2011. She earned a B.A. in education from DWU and an M.S. in management from the University of St. Francis. She holds multiple credentials from national, regional and statewide financial aid administrators’ organizations. Alexander serves on the board of directors and is the co-chair for the fall conference of the SDASFAA. Locally, she is active as a board member for the Mitchell Heart & Sole cancer assistance program.

Alexander was chosen as recipient due to her extraordinary efforts working through student concerns during the pandemic. She is described as “student-focused [and] able to navigate challenging situations.” Alexander developed the rubric to determine the allocation of CARES act funds during 2020 and 2021, allowing many students facing financial difficulties to remain in school with the additional aid.

In a statement, DWU president Amy Novak said of Alexander, “Her adeptness with financial aid, her professional communication with all whom she encounters, her willingness to meet every family where they are at and work toward their success have made her an invaluable team player. She is a tireless advocate for students and for successful completion.”

Each honoree receives an engraved plaque and a cash award.