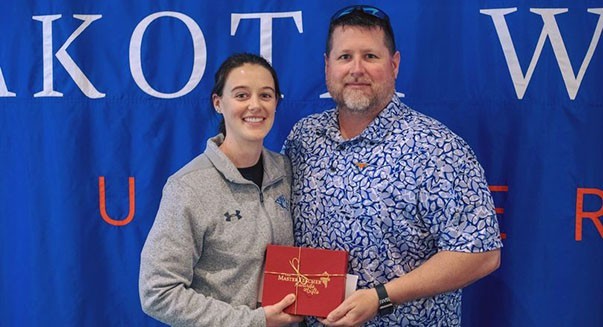 The Clarke Award, first instituted in the 1996-97 year, was endowed by John and the late Vicki Clarke as an award to be given annually to a Dakota Wesleyan University faculty member for excellence in teaching, serving the needs of students and service to the university and community. The staff award was added in 2019.  Nominations are solicited from the DWU campus community.

Reinesch began his teaching career at DWU in 2018. He holds a B.A from Dakota Wesleyan University and an M.A. in Criminal Justice from American Military University. Reinesch also currently serves as the faculty athletic representative. He is a Marine Corps (Infantry) veteran of two combat deployments in support of Operation Iraqi Freedom.  Not long after being honorably discharged in 2006, he began working for the Mitchell Police Department. There, he held the ranks of patrol officer, detective/investigator and patrol sergeant. He worked for the MPD for more than eleven years before being hired by DWU.

In nominations from both faculty and students, Reinesch was noted for his level of organization; the relevance and applicability of the learning experience he offers his students; and his respect for a diversity of perspectives.

Provost Joe Roidt, in his remarks recognizing Reinesch at the commencement ceremony, stated, “In addition to the excellence Professor Reinesch demonstrates in teaching and in meeting the needs of students, his accomplishments in the area of service are equally significant and impressive. He is extensively involved in the support of veterans in the Mitchell community including his work organizing an annual benefit golf tournament and his work in support of the veterans park in downtown Mitchell.”

Beck, a two-time graduate of DWU, was presented with her award at the annual employee recognition event.  Beck graduated with a B.S. in Biology in 2015 and an M.A.Ed. in 2017.  She has served on the coaching staff since 2015.  In her nomination Beck was noted for being selfless, dedicated, responsible, devoting her full attention to whatever she is doing, patient, understanding and level-headed.  She is regarded as one who goes to great lengths to foster an attitude of service in her players, participating in community events like Special Olympics, Angel Tree and Mitchell schools visits.

When announcing Beck’s selection at the annual employee recognition event, DWU executive vice-president Theresa Kriese said, “Celeste has worked hard to develop operational expertise in her area, but always keeps the student at the forefront of everything.  She can be counted on to display genuine care for others.”

Each honoree received an engraved plaque and a cash award.