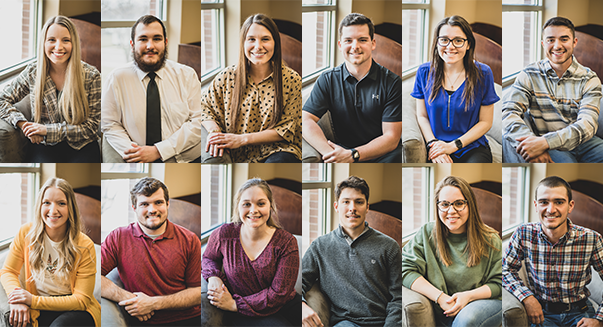 MITCHELL — Twelve Dakota Wesleyan University students are candidates for the Scotchman and Ms. Wesleyan awards, the highest honor given to students in their senior year at the university.

The titles of Scotchman and Ms. Wesleyan are given to recognize two seniors based on campus leadership, service, community leadership, academics and character. The honor of Miss Wesleyan began in 1929 and the Scotchman in 1939. The title for the Scotchman was borrowed from the university’s song, “The Scotchman.” Several notable alumni and four current DWU employees received this honor during their enrollment as students.

To qualify for candidacy, students must have a minimum GPA of 3.25 and be ranked as senior status. Those eligible submit a résumé of activities and awards and a Student Senate-appointed panel chooses the top male and female candidates. The top candidates are interviewed by a committee of students, staff and faculty who choose the Scotchman and Ms. Wesleyan. The winners will be announced at the Honors Convocation to be held on Friday, April 30, at 6:30 p.m. The event is open only to those with tickets.

The candidates for the 2021 Scotchman include:

Devin Bedke is a native of Kearney, Neb. A biology major, he also participated in band, choir, Highlanders and CHAOS Club, and was a student ministry volunteer. Bedke received the Harriet N. Houk Scholarship for biology and was inducted into the Sigma Zeta national honor society. He was also an accomplished musician, awarded the Sinfonia Service Award for music. He plans to pursue a graduate degree in healthcare. Bedke is the son of Dennis and Debra Bedke.

Joshua Garry, Sioux Falls, is an accounting major who plans to return to DWU this fall for a fifth year of football. Garry’s activities included football and Business Club. He will start a full-time position at ELO CPAs & Advisors in Chamberlain after graduation. He also plans to pursue an MBA at DWU. Garry is the son of Chuck and Kim Garry.

Edgar Meza, of Spearfish, is a wildlife management major. His activities at DWU included officer for the Conservation Club and member of Alpha Sigma Chapter of Sigma Zeta, and he served as a resident assistant. Meza plans to work for the Department of Game, Fish & Parks as a conservation officer. He is the son of Jorge and Sonia Meza.

Caden Milmine came to DWU from Buffalo, Wyo. He is an accounting major who participated in football, track and field, and Student Ministry Council. After graduation, Milmine plans to enroll in the MBA program and continue his track career at Dakota Wesleyan. His parents are Ken and Christy Milmine.

Layne Stafford is from Arlington, Neb. He is graduating with an accounting major with an emphasis in sports management. Stafford was active in baseball, Business Club and student ambassadors. He plans to continue his financial advising career after graduation. Stafford’s parents are Tim Stafford and Kandi Hill.

Wyatt Voelker is from Newcastle, Wyo. He is a wildlife biology major. His involvement was in Conservation Club, Student Ministry Council, golf and the McGovern Engagement Group. After graduation, Voelker hopes to work toward a master’s degree in predator ecology or to find a job doing predator control. He is the son of Ryan and Donna Voelker.

The candidates for the 2021 Ms. Wesleyan include:

Logan Amundson calls Watertown her hometown. She’s a psychology major with a minor in family studies concentrated in counseling. Amundson was a member of Psychology Club, was a cheerleader (captain for two years), served as class president for the Student Association Senate

in both her junior and senior years and was a student ambassador. Amundson will pursue a master’s degree in school counseling. She is the daughter of Wally and Gayle Amundson.

Abigail Hanson is from Alexandria. She majored in accounting while at DWU and was a member of several organizations: Dakota Wesleyan Choir, Wesleyan Bells, Dakota Dynamics, Business Club (treasurer) and Student Ministry Council. She was a student ambassador and was part of the 2019 Peru mission trip team. Hanson has accepted a position at Schoenfish and Co. in Parkston as an accountant and plans to take the CPA exam. Her parents are Jason and Rita Hanson.

Emily McDonald is from the community of Crooks. She is a biochemistry major and has been active in CHAOS Club, tutoring, and track and field. She is hoping to attend medical school after graduation. McDonald’s parents are Brad and Terri McDonald.

Grace Rule is a Sioux Falls native. She majored in business administration with an emphasis in management and sports management. She was the 2020-2021 Student Association Senate president, in addition to serving as Business Club vice president, Third Freedom club member and a student ambassador. After graduation, she will work at Landscape Garden Centers as the Director of First Impressions and will seek graduate school opportunities. Rule is the daughter of Fred and Julie Rule.

Lacey Wipf comes from Freeman. Her major is biology with an individualized education minor. Wipf was involved in a variety of activities at DWU: Dakota Wesleyan Choir, Wesleyan Band, Wesleyan Bells, Highlanders, residence life staff, Student Ministry Council, Third Freedom, Student Association Senate and McGovern Engagement Group. After graduation, Wipf will enroll in a graduate program for pathology and hopes to eventually work as a pathology assistant. Her parents are Larry and Sheila Wipf.