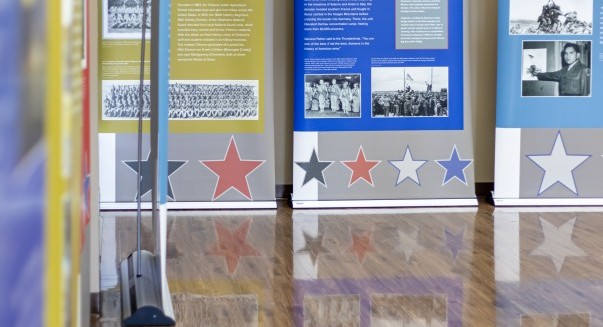 The National Museum of the American Indian (NMAI) is bringing its traveling exhibition, “Patriot Nations: Native Americans in Our Nation’s Armed Forces” to Dakota Wesleyan University.

The traveling exhibition will be displayed in the McGovern Library on the campus of DWU during the entire month of November.

According to the Smithsonian website, “Patriot Nations: Native Americans in Our Nation’s Armed Forces,” reveals the remarkable history of Native American veterans through art, photography and essay. The exhibition will feature 16 panels and authenticates over 250 years of Native peoples’ contributions in the U.S. military. Native Americans have served in every major U.S. military encounter from the Revolutionary War to today’s conflicts in the Middle East in higher numbers per capita than any other ethnic group.

In conjunction with the Smithsonian exhibition, DWU history professor, Dr. Sean Flynn, will be conducting two presentations for his book, “Chief, Marine Corps Warrior: The Life of John P. ‘Pat’ Flynn, Jr.” The presentations will take place Tuesday, Nov. 19 from 7-8 p.m. and Wednesday, Nov. 20 from 12-1 p.m.

The book examines the colorful career of Flynn’s father, a decorated combat aviator and Korean War prisoner of war, and the ways that his Lakota Sioux heritage were expressed during his twenty-four years in the Marines. He was one of few pilots of American Indian descent to fly combat missions in World War II and Korea.

“My father was a modern American warrior in every sense of the term. He flew a combined eighty-two combat missions in World War II and Korea and was often on the cutting edge of aviation design, technology and weaponry,” said Flynn. “He survived sixteen months of POW captivity under the Chinese Communists. He attended the Air Force Command and Staff College and retired at the rank of lieutenant colonel. At heart, however, Dad – a member of the Rosebud Sioux Tribe and a descendant of Spotted Tail – was a Lakota Sioux warrior. His personal heroes were Spotted Tail, Crazy Horse and Gall, and he believed one could learn as much about leadership, decision-making and tactics from the battles of Rosebud or Little Big Horn as from Gettysburg or Okinawa. His aviator call-sign, ‘Chief,’ was most appropriate.”

The exhibition and presentations from Flynn are both very timely as we approach Veterans Day on Monday, Nov. 11 and remember those past and present, from all backgrounds, who have made the ultimate sacrifice in defending our country.

“Patriot Nations: Native Americans in Our Nation’s Armed Forces” was produced by the Smithsonian’s National Museum of the American Indian. The exhibition was made possible by the generous support of the San Manuel Band of Mission Indians.