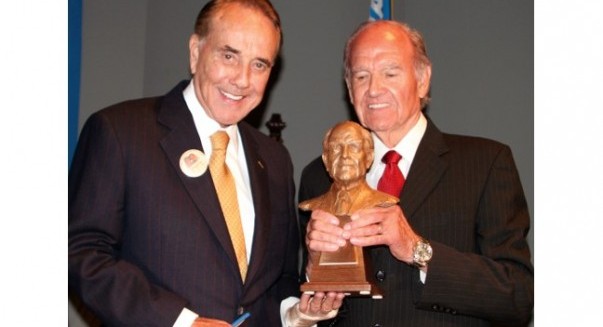 *pictured: Bob Dole is shown receiving the McGovern Award at a donor banquet in the fall of 2016. Dole was the first recipient of the McGovern Award for Leadership and Service and gave the evening's keynote address. Pictured left to right is Bob Dole and George McGovern*

The World Food Programme (WFP) has been named the recipient of the Nobel Peace Prize for 2020.

The motivation in awarding the WFP the prize was “for its efforts to combat hunger, for its contribution to bettering conditions for peace in conflicting areas and for acting as a driving force in efforts to prevent the use of hunger as a weapon and conflict” according to the official Nobel Prize website.

Dakota Wesleyan University alumnus and former U.S. Sen., the late George McGovern, was responsible for first initiating the establishment of the WFP. The WFP is the world’s largest humanitarian organization addressing hunger and promoting food security.

McGovern was elected to the House of Representatives in 1956. In 1961, newly elected President John Kennedy appointed McGovern to lead the U.S. Food for Peace Program. President Kennedy encouraged McGovern to think about how to better meet the needs of the world’s hungry. The United Nations (U.N.) approved an idea seven months later and the U.N. World Food Programme was formed.

In the 1990s, McGovern teamed up with former U.S. Sen., Bob Dole, to revive and improve school feeding programs for children across the world, and together McGovern and Dole launched the McGovern-Dole International Food for Education and Child Nutrition Program.

“From launching the Food for Peace program in 1961 to the development of the World Food Programme soon thereafter, to his work with Bob Dole in launching Food for Education, McGovern’s efforts brought about massive physical and mental improvements for millions of the world’s poor. Dakota Wesleyan couldn’t be prouder of this crusader for world hunger,” said Joel Allen, director of the McGovern Center at DWU.

In recognition of their accomplishments, McGovern and Dole were awarded the World Food Prize in 2008.

The WFP stated the following in a press release announcement on their website:

“The Nobel Peace Prize is not the U.N. World Food Programme’s alone. We work closely with governments, organizations and private sector partners whose passion for helping hungry and vulnerable people equals ours. We could not possibly help anyone without them. We are an operational agency, and the daily work of our staff is driven by our core values of integrity, humanity and inclusion.

“George McGovern’s legacy of hunger relief lives on. As a driving force for the World Food Programme, his efforts and passion, as well as the commitment and desire to end world hunger through this organization, is solidified through this very well-deserved recognition of the Nobel Peace Prize. Dakota Wesleyan continues to mirror the efforts of George McGovern in preparing young adults to make the kinds of impacts that he did – leaving the world better than they found it,” said DWU President Amy Novak.