DWU announces Clark and Voelker as Ms. Wesleyan and Scotchman for 2021 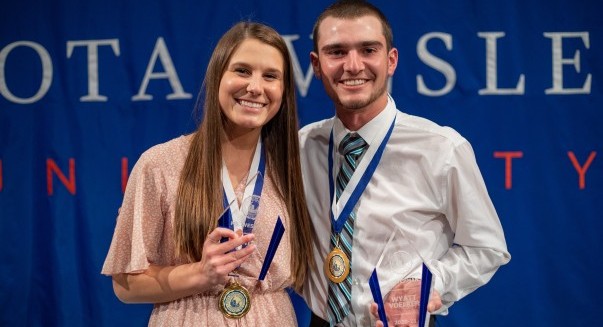 To qualify for candidacy, students must have a minimum GPA of 3.25 and be ranked at senior status. Those eligible submit a resume of activities and awards and a Student Senate-appointed panel chooses the top male and female candidates. The top candidates are interviewed by a committee of students, staff and faculty who choose the winners.

Clark, originally from Garretson, is a secondary English education major. Her roster of clubs and organizations included soccer, student ambassadors, Future Teachers Organization, softball, Tiger Activities Group, Big Friend Little Friend, Christian Corps, Women’s Delight Group and Student Ministry Council. She received the Matthew D. Smith medal for education and the Badger Clark medal for literature. She is an Education Learning Through Service scholar; has earned Honors in Scholarship and is a Scholar-Athlete. Her parents are Doug and Tana Clark.

Voelker is from Newcastle, Wyo. He is a wildlife biology major whose involvement was in Conservation Club, Student Ministry Council, golf and the McGovern Engagement Group. Voelker is a Wildlife Management Distinguished Scholar; recipient of a Hughes Grant-in-Aid Award; a Scholar-Athlete; an NAIA-Daktronics Scholar-Athlete; a member of Sigma Zeta and has earned Honors in Scholarship. He is the son of Ryan and Donna Voelker.