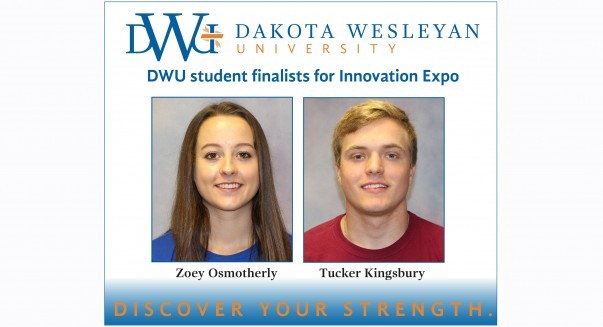 Two Dakota Wesleyan University students not only made it to the final round during last week’s Innovation Expo – they placed.

Zoey Osmotherly, a DWU freshman from Oelrichs, and Tucker Kingsbury, a freshman from Letcher, were two of the six finalists at Innovation Expo hosted Oct. 13 by the Enterprise Institute at the Orpheum Theater, Sioux Falls. There were almost 200 college students from six universities across South Dakota.

All six finalists received $100 for making it to the end, and Osmotherly’s idea for window protectors came in second, winning her $200, and Kingsbury’s idea for distracted driving senor came in fourth. Both students are part of a 200-level entrepreneurial course at DWU with Dr. Ryan Van Zee, director of the Kelley Center for Entrepreneurship, and Teresa Quinn, assistant director of the Kelley Center for Entrepreneurship . Students in these classes have been developing business ideas since the beginning of school and were encouraged to submit them to the Innovation Expo.

Osmotherly’s idea of a vehicle window protector is created to protect windshields from chipping or cracking when struck by gravel kicked up by other drivers. Using the same technology already invented to protect cell phone screens, Osmotherly would use that same tempered glass in a three-layer film that consumers could apply themselves.

Kingsbury wants to decrease the number of distracted drivers on the road. His idea of a Distracted Driving Senor, which turns the driver’s cell phone into a car-locking mechanism, would prevent drivers from checking their phones or operating their phones by hand because the phone would be required to be plugged into a circuit within the car’s console in order for the vehicle to operate. All phone calls would be directly linked to the car’s radio system (like a Bluetooth) and the driver wished to use his/her phone, he/she would then have to pull over to unplug it or else a sensor would trip and the car would cease to run. For those who do not have a cell phone, there is a chip that could be purchased to insert into the console. The main demographic is distracted teen drivers and the main consumers would be their parents.

During the expo, several South Dakota entrepreneurs spoke on all aspects of innovation, and entrepreneurship throughout the day.

“Every year the expo hosts a college student innovation contest,” said Teresa Quinn, assistant director for the Kelley Center for Entrepreneurship at DWU. “The college students submit in 300 words or less their innovative idea to the committee.”

The other finalists were each from the following schools: Augustana University, Lake Area Tech, South Dakota State University and the University of South Dakota. DWU was the only school with two students in the final round.

“You could hear buzz in the audience that two of the finalists were from DWU,” Quinn said when the master of ceremonies announced all six finalists. “The finalists were given one minute to present their idea. One finalist got cut off because he talked too long, the emcee held them to a tight schedule. I had prepared my students for a two-minute presentation because that is the typical format in situations like this, therefore, when the they were told backstage they only had one minute, they had to make some quick adjustments.

“Without a doubt, our students rose to the challenge. Zoey did a particularly good job of getting all the important points discussed within the new time limit.”

The finalists were then judged based on their submitted written ideas and the winners were announced.

Next up for Osmotherly and Kingsbury will be DWU’s own Shark Tank, where local business owners and entrepreneurs are invited to campus to give feedback to students’ ideas. Osmotherly and Kingsbury will also offer their peers some advice on idea development. Some of the community members who have volunteered to be “sharks” include Wyonne Kaemingk of Kaemingk Properties; Laura Klock of KlockWerks; Dave Olson, original startup partner of ELO CPA; and Ron Gates, former co-owner and operator of Firesteel Healthcare Center in Mitchell.